Was considering a Canon 5d but probably not now.  Been doing some looking at the Canon 5d and using our Sigma 8 and here is what I have learned.

In Photoshop I overlayed a real 20d/Sigma8 fisheye image on a  5d full sized 4368 x 2912 canvas [ resized for forum comment] but you will get the idea. 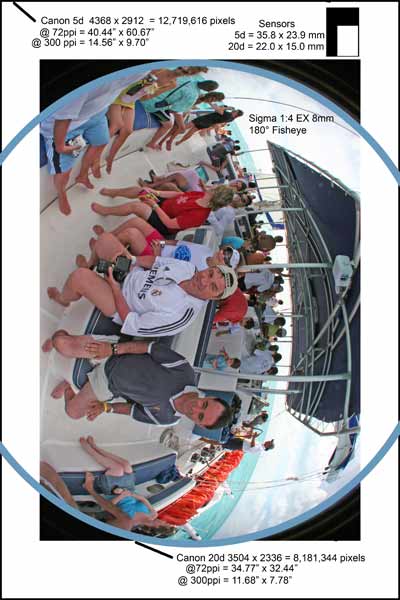 But this somewhat interesting.  Next step is to actually put the Sigma 8 on a 5d and take a real image test.

Bigwade, is that your wwp submission? Lots of sharpness for sure and a lot of angular resolution. The details at heavy zoom are very good.

Do you get your feet in the shot with the hand held shot? I have a nikkor D70s+Nikkor 10.5 and I get my feet and some leg in the hand held down shot.

Bophoto has some more handmdade style mrotator ideas for the sigma 8mm lens and the 10.5mm lens which grip the lens rather than the barrel

Roger Howard has put some pics of his setup with the grip sigma 8mm and canon 20d. Looks more sensible than you might think.
http://tinyurl.com/ehqn2

And the latest Jook Leung pano of the apple store is meant to be a nikkor 10.5mm on a 5d with a bophoto grip used

considering the low light its really quite immpressive what such a setup can achieve.

Luc Vascon who helps design the agnos panoheads talks about them making a new grip on this vein for gripping lens barrels though its not clear quite when it might be out or for what lens's.

There are a canon and a sigma 15mm fisheye. I don't know which is best but both you hear described as ok but not the greatest len's ever. Personally from looking around I not totally convinced its worth the extra money compared to a sigme 8mm and a canon 30d and less shots around. I'd only go with full frame if I wanted three shots around or to use the nikkor 10.5mm lens. That and if I actally had a few thousand pounds knocking about :)

The Canon FE is older in design than the Sigma.
Both will do but because of the newer design, i bought the Sigma and
it works fine.
Note: if you are used to shoot 4 around, 6 isn't fun esp with moving
things..

You can do three with a full circular fisheye lens like the Sigma 8mm (you can even do two if you wish) much the same as a Nikon Coolpix with FC-E8 or FC-E9 with much superior image quality and pixel size.

Best results will still come from 4 shots in rotation though.

But, I believe the Sigma 8mm will produce a full circular image on the 5D.

Link to a comparison page of the 10.5 and 8mm. It shows an 8mm on a full frame sensor
http://michel.thoby.free.fr/Blur_Panorama/Nikkor10-5mm_or_Sigma8mm/Sigma_or_Nikkor/Comparison_Short_Version_Eng.html

Sigma sais it is a full circular image on a full frame sensor as well.
http://www.sigma-photo.com/lenses/lenses_all_details.asp?id=3255&navigator=4

There is some wasted sensor space on the left and right but due to the increased pixel dimensions you should get a higher quality image than on a cropped sensor.

I have read great things about a 15mm+5D setup. Your back to 6+T+B but you just cant beat the quality. The Sigma is good but lacks sharpness as you get away from the center. The full frame fisheye performs much better. In fact you can take the pedals off the Nikkor 10.5 and shoot drum images on a full frame sensor. You end up with the same thing as if using a 8mm on the cropped sensor. So this means you can shoot 4 but have the added quality of a full frame fisheye lens.

I suspected as much.. thanks.  Yes, I realized that it is a matter of optical projection on the CMOS rather than a pixel thing.

I will let you know in a couple of hours.  Going over to Arlington Camera and see if I can take a spin right in the shop.  I have read that the Sigma 8 on a full sensor 5d you only need to take 3.  So I will take 3 and a 4 image pano and see how well they stitch.  There has to be a piece of software that we have that will work.

My hangup is I am still using the Kaidan 990 Kiwi pan "L" head.  The Canon 5d center of lens axis might not be directly over the top of the point of rotation on the left to right axis.  If its off center by 2mm R <- Lwill the software compensate ? Won't know until I try one.

I'll do a show and tell later today after I find out more.

Use can shoot as little as 3 shots with a Canon 5D and Sigma 8mm and stitch with Panoweaver 3.01 pro or Panoweaver 4.0 this has been done many times.

Using a Canon 15mm or even a Sigma 15mm can be stitched with Panoweaver 4.0 in full frame mode.

I have read serveral places that you can use an adapter and shoot a panorama with the canon 5d and nikkor 10.5mm with just 3 shots. This must be the best possible combo.

Ok, now have the Canon 5d.  Resized of course for this forum 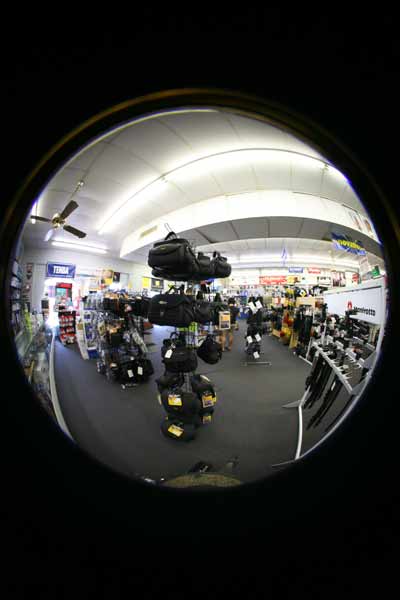